History of the School

The Deepings School - a brief history

The new school was built at a total cost of £105,000. The new Deepings Secondary Modern School is sited on what was known as the Parkland, which at the time belonged to the Manor at Waterton Hall.

Building work commenced on the site in 1957 with the school opening for the first intake of students in early September 1958.  During excavation work on the site 11 silver coins were found which are thought to date back to the reign of King Edward 1V and King Henry V11.

The School was officially opened the following year by the 6th Marquess of Exeter who presided over Burghley House and was known as The Deepings Secondary Modern School with 247 students on roll and less than 9 full time teachers. Today, the school is community school and a member of the Anthem Schools Trust with almost 1600 students on roll and over 200 staff, with 100 being teachers.

Jack Lamb, as he was more commonly known, was the inaugural head at the Deepings Secondary Modern School, moving from Ramsgate to take up his appointment.

John Sweet took over the reins at the school following the retirement of Jack Lamb in 1973.  He had been a Deputy Head at the school for 9 years.  Tragically he was killed in a road traffic accident on Wednesday 2nd October 1974.

John Meredith joined the school in Easter 1975.  He joined from the Prince Rupert School in Rintela, Germany.

Dr Bryars joined the school in 1988 from Wickersley School, Rotherham. He improved the school both in terms of performance and the development of the site during his tenure.

Chris Beckett worked at the school for 28 years, his final 9 years in the role of Headteacher.  He was instrumental in developing the school academically and achieving an Ofsted 'Outstanding' grading on three occasions. He secured significant funding to improve the school site and developed partnerships within the local community.

Richard Trow joined the school in 2007 as a Deputy Head from Middlecott School, Kirton, Lincolnshire.  He was promoted to Head Teacher of The Deepings School in 2014, before moving on to a new Headship at the Priory Academy in Lincoln in 2016.  During his tenure he led the process that redefined the school’s vision, values and aims, introducing the motto ‘Dare To Excel’.

What does the school badge mean?

Elijah Lamb chose the school colours; blue and gold, which are the components of green (the colour of Lincolnshire).

He also designed the school badge; a roundel of St Guthlac and the pilgrim scallop shells of St James.

In Mr. Lamb’s own words;

'The badge combines the three cockle shells of St James with the symbol of the departure of St Guthlac by boat from Market Deeping to found his cell at Crowland.'

St Guthlac, formerly a soldier of fortune, later dedicated his life to religious study, counselling and solitude. He died, aged about forty, in 714 AD, and Crowland Abbey was founded in his memory by Ethelbald, King of Mercia, a few years later.

Key milestones in the history of the school: 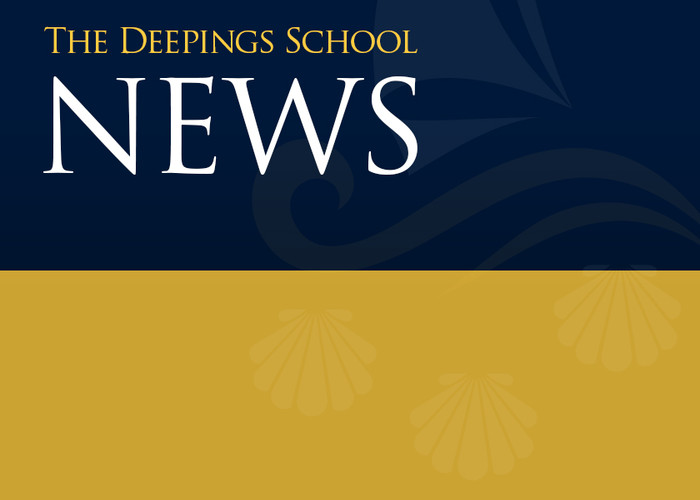 Thank you ma'am, for everything - Headteacher's Blog

How to find us